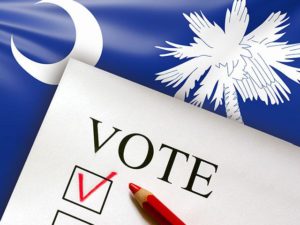 Voting is a privilege and a right and a responsibility!

“Elections belong to the people. It’s their decision. If they decide to turn their back on the fire and burn their behinds, then they will just have to sit on their blisters.” Abraham Lincoln

The right to vote gives you the power to hold elected officials accountable – to remove those who do not represent your values and replace them with leaders who will fight for your vision for our country.

“The future of this republic is in the hands of the American voter. ” Dwight Eisenhower

Barriers such as poll taxes, restrictive identification requirements, and eliminating voters from the rolls have been and in some cases continue to be used by elected officials who fear those voters who disagree with their plans for the future of the country.

“You give up or you work for change. Do we settle for the world as it is, or do we work for the world the way it should be? …There is power in voting. If you want change you cannot stay home on election day.” Barack Obama

Over the years, Americans have marched, fought and died to protect your right to vote. Do we ignore the sacrifices of those brave patriots of the past or do we continue their fight until all American citizens are able to vote their conscience without fear of retaliation?

“The right of ordinary men and women to determine their own political future lies at the heart of the American experiment. The Voting Rights Act proposed and signed by then-President Lyndon Johnson in 1965 broke the segregationist lock on the voting box.” George W. Bush

2020 gives each of us a voice in our country’s future. Don’t throw away your right to stand up and be counted.

Submitted by Carol A.